Message from your Potentate, September 2013

It has been a long time since my last article so we have a lot to cover. The first item was June 30th through July the 4th. Your officers went to Indianapolis for the Imperial session where we held our business session plus the election of Imperial Potentate John A. Cinotto, Deputy Imperial Potentate Dale W. Stauss, and Imperial Treasurer James L. McConnell. It was a lot of work and a lot of fun. Next year the Imperial is in Minneapolis during the month of July so start making your plans to go. This will be as close as Imperial will ever get.

We no sooner got back from Imperial and we got to host the North Dakota Shrine Football game at the Alerus Center. As usual, Past Potentate Dale Duchscherer and his crew did an outstanding job in organizing the event. One of the things done differently this year is that some of the Twin Cities Hospital staff came to Mayville State College and did a screening clinic and interacted with all the players right at the college. This seemed to go over great with the players and the staff. I am not sure of the numbers but I know we did get more children as patients for the Shrine Hospitals. We then hosted the players to a supper that evening before we did our Units meeting. Saturday the game was played at the Alerus Center in front of a good crowd. As usual the crew running the Oasis did an outstanding job of taking care of everybody. Good food and good fellowship was had by all.

Then, August gets here and off we go again, this time to Duluth for our MSA (Midwest Shrine Association). We had a good group of Shriners go to Duluth. We participated in two parades while we were there on a Thursday night and a Saturday morning. Congratulations to our own Kem Chanters as they won a gold in the chanter competition. I was able to get over to listen to them and I came away very impressed with them and the level of competition. I want to thank Chuck and Jonelle Soderstrom and Darren and Janie Briss for lining up the Kem party in Duluth. It was indeed great. The Kem Drum and Bugle and the Kem Band played at our party. The highlight was when Imperial Sirs Cinotto, Stauss and McConnell and their ladies joined us. I particularly enjoyed when the Kem Band sang the “Firemen’s Song” to First Lady Margaret Cinotto. It was highly entertaining. You need to hear it sometime.

A couple of items I would like to touch on are some projects we had just recently started. One is already completed and that was the Shrine Potato Bowl parade. This was our first year and I think it went over great with lots of Shriners participating and I notice we had a couple of nice write-ups in the local paper. Thank you Bill Steckler for putting this together for us. The other project we are doing involves the home football games for UND. We call it our tailgating project. We would like to have more Shriners out there with their Fez’s and to tell the young people our story.

On Sept. 13th and 14th, CR Lowell Domier and myself went to Bemidji to participate with the Headwaters Shrine Club for the Bemidji State University Shrine Bowl. In addition to the game they hosted a screening clinic and I understand there are now 13 new patients for the Shrine Hospital.. Great work guys! It was a great honor to present an autographed football signed by all the players to Princess Kim during the halftime ceremony in the center of the field. Princess Kim started as a Shrine patient when she was 5 years old and has continued to go for the past 10 years.

Steve and Lib Symons have been working on our new website at kemshriners.com. Note this is .com not .org. Please visit our website and we will be adding more things all the time. We are particularly looking for more items to put on the calendar.

Last is MEMBERSHIP. People we need your help! Do whatever you can to get a new member. We have had 14 straight years of positive growth and we do not want to stop now. Especially with our own Imperial Sir Dale Stauss as membership chairman and he will be our Imperial Potentate next year. Let’s get to work. We have scheduled a one day class for Masons on the 16th of November in Grand Forks and a ceremonial for Oct. 19th in Williston and Dec. 7th in Grand Forks. If you are not comfortable in talking to somebody about being a Shriner, call one of the Divan. We will all help. If they can’t make one of the scheduled dates, let us know and we will make something work. If need be, I will run out to Williston and Minot again. 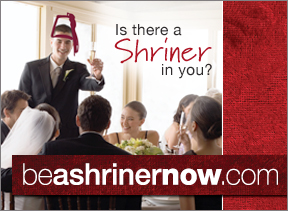